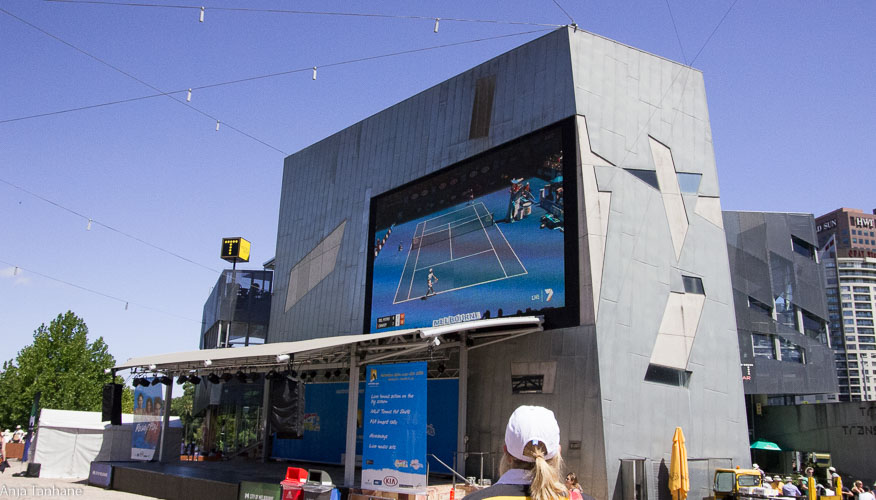 It was the beginning of the fourth set, and the veteran tour player was finding it increasingly difficult to control his frustration as the young upstart broke his serve and then held with ease. Week one of the Australian Open, and the stakes were high for both players. It had been a pleasant day of tennis so far, not too hot, watching some great players, but this was the first match of the day which hadn’t been decided in straight sets, and the crowd, stirring itself out of the early afternoon stupor, was beginning to get involved. The veteran had plenty of fans in the crowd, but there was also enthusiasm for his young opponent, and the clean and confident shots he was playing.

In the row behind me, a woman in her sixties and her younger relative, who was about twenty, began to discuss staying on to watch the end of this match. They both agreed it was getting exciting, and it would be a shame to miss it, but their decision to stay on involved a change of plans, and there was now the problem of which train to catch home. As relentlessly as the tennis ball being belted back and forth below, they tossed this question between them for the next forty minutes. Which tram should they catch, and which train? Who would know? They texted people and told each other the responses, they suggested other people to text who might know, one person wasn’t replying so they wondered if her phone battery was flat or she might have run out of credit or perhaps she’d lost her phone. Every twenty minutes or so they turned their attention to the match and briefly commented on its progress before returning to the vexed question of which tram, which train, and who to call. Eventually their conversation drifted to other topics, but before long I once again heard them discussing which tram, which train, to catch.

I was irritated, astounded and fascinated. They saw virtually nothing of the match, which was now in a closely fought fifth set. It was clear either player could easily win it – the younger player hadn’t faltered under pressure and was playing as strongly as ever, and the older one had plenty of experience and energy to throw back at him. The women behind me had clearly travelled a long way from a regional area in order to watch some tennis, they were changing their plans in order to see the end of the match, and yet, because of their relentless worrying, they paid almost no attention to it. It was annoying to hear their conversation go on and on during points, but it was also a brilliant exposition of how our worrying mind can rob us of enjoying the experience right in front of us.

The tennis centre, tram stops and train station were dotted with staff who would have been happy to point them to the right train once the match had finished. For a major international event like the Australian Open, the city of Melbourne was well prepared to assist visitors who were unsure where to go. They could have enjoyed the match, asked for help to the train, and spent the train trip home discussing the match, and in particular the closely-fought fifth set. Instead, they barely took notice of the occasional point being played.

We have all done it – been too busy worrying about a future which will probably take care of itself, to enjoy whatever is on offer in the present moment. Sometimes we have every reason to be concerned about the future. But more often than not, we know we have the capacity to deal with what the future is likely to bring, and we have friendly guides all the way from the tennis centre to the train station to help us on our way.

This week, when you find yourself worrying about something, ask yourself – is the extent of my worry justified? Or is it simply preventing me from enjoying the present moment?